(Last UPDATED 9/17/2021)  The newly renovated (and renamed) SAFE Credit Union Performing Arts Center opened with Hamilton on September 15.  Contrast the 1974 building entrance (above) with the new (below). 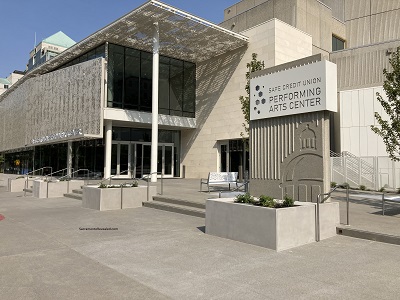 It was estimated that trying to renovate the Community Center Theater while accommodating performing arts events would take approximately four to six seasons!  I for one would much rather attend performances at the Sacramento Memorial Auditorium during 2019-2020 as opposed to a much longer period of disruption.  How about you?

The Community Center Theater building was built in 1974 (see “A Bit of History” below).  The building is dated, inadequate, and unattractive. I have attended many events over the years at the Community Center Theater.  For example, I am a long-time Broadway Series season ticket holder, and I also occasionally attend performances of the Sacramento Ballet and Sacramento Philharmonic and Opera.

First of all on my list is the inadequacy of the restrooms.  Patrons of the arts should not have to dash across the outside courtyard during intermission in inclement weather to use the restrooms in the nearby Convention Center!

Secondly, there is the fact that the building is out of compliance with the federal Americans with Disabilities Act (ADA), and that the acoustics leave much to be desired.

Renovations of the Community Center Theater will include:

Luckily, there is plenty of room to expand the Community Center Theater towards L Street to accommodate the renovation.

Changes to the expanded building will include a new “look”.  When all is said and done, I feel confident that the renovated Community Center Theater will be something Sacramento can be proud of.

The issue of renovation v. relocation of the Community Center Theater has been very controversial over the years.  I have considered the pros and cons put forward, but it all comes down to location-location-location.

Many performing arts patrons like to make an evening of it – I certainly do.  The close proximity of the L Street site to parking and the numerous restaurants close by makes the existing location ideal – in my opinion.

A Bit of History…

June 30, 1974:  Let it be recorded that at 10:30 a.m. on June 29, 1974 – give or take a few minutes – 500 feather-flapping pigeons soared into the air through a rainbow of balloons and spouts of brilliant orange smoke and the Sacramento Community Center officially was born.

Let it be noted, too, that a speech was made and prayer was said, a poem recited and a band played mightily – and in some eyes, there were tears – as the American flag rose slowly into the stifling heat of the summer day.

For a blessed event, it was spectacular.  But like any birth, it’s not so much the moment that counts – but the unwieldy excitement that there’s so much to come.

For hundreds of Sacramentans, that was the mood yesterday.  What moved the day were everybody’s private daydreams about what this town’s new baby might grow up to be.

“This is the largest single public improvement ever made in Northern California,” said Mayor Richard Marriott, standing alone, in the shadow of the huge complex, a few moments before the festivities began.  He looked up the tally gray walls awhile, switched to wax philosophically, “This is a beautiful day, a great day for Sacramento; it’s a dream come true.  You wouldn’t know this is sleepy little River City, not this morning.” “What’s the quotation?” the mayor asked to no one in particular.  “Without vision, the people perish?”

(12/11/19)  It was recently announced that the renovated Community Center Theater will be renamed the SAFE Credit Union Performing Arts Center.

SAFE Credit Union has made a 25-year, $23 million commitment to the City of Sacramento in exchange for the naming rights.

Comments on the renovation of the (to be renamed) Community Center Theater?