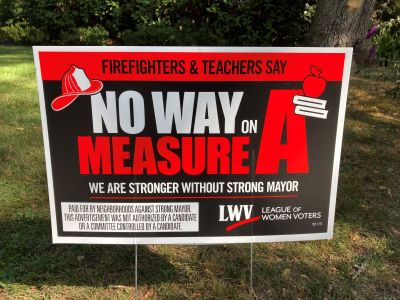 (Last UPDATED 5/13/22) Description of the Sacramento Strong Mayor Initiative – Measure A (aka The Mayoral Accountability and Community Act of 2020). NEW: See “Update” below.

On November 3, 2020, Sacramentans will vote on Measure A.  Measure A will significantly amend the City of Sacramento City Charter.  Given the importance of Measure A, voters will want to do their homework and make an informed decision when they mark their ballot.

If the term “Strong Mayor” sounds familiar that is because this issue has been before voters previously.  The last time was when then-Mayor Kevin Johnson sought to change the city charter to the Strong Mayor form of government in 2014.  Voters rejected the initiative 56% to 44%.

What does Measure A Do?

The full text of Measure A and related documents can be found on the City of Sacramento Measure A website.

The East Sacramento Improvement Association (ESIA) recently held a “virtual” Forum on Measure A.  Other neighborhood associations in the City have likewise held forums on the topic.

The ESIA Forum featured Vice-Mayor Jeff Harris speaking in opposition to Measure A, and Chet Hewitt, Co-Founder of Build.Black., speaking on behalf of Measure A.

Both gentlemen did an excellent job articulating their positions. Virtual attendees (ESIA members and other residents of East Sacramento) had an opportunity to ask questions of the two speakers.

The ESIA forum was taped, and it will be made available on the ESIA website in the near future.

NEW:  ESIA has a contemporary new name – the East Sacramento Community Association and a new website.  Check it out!

During my long career as a lobbyist representing various interests at the State level, I had developed strong feelings about “ballot box” budgeting.

As a result, going into the ESIA Measure A Forum I had a bias against Measure A.  I had read the text of Measure A and various other documents.  There are some excellent pro and con opinion pieces out there.  I had also checked the list of support and opposition, always a good way to initially check out the lay-of-the land.

After the Forum I had even greater concerns about the significant changes proposed to the City Charter.  I did not find the argument that the Strong Mayor form of government would make governance “more efficient” compelling.  Nor was I convinced that the change in governance was needed to ensure “accountability”.

Instead, the comments of Councilmember Jeff Harris gave me a greater understanding of what the residents of Sacramento’s many diverse neighborhoods would lose when it comes to having a voice and representation at City Hall.  I thought it noteworthy that both Councilmember Larry Carr of Meadowview and Councilmember Allen Warren of Del Paso Heights are in opposition to Measure A.

We all care about the housing crisis, the homeless, the people who have lost their jobs as a result of the COVID-19 pandemic, and the children and youth “most impacted by poverty, violence, and trauma”.  However, tying the hands of City officials trying to manage budget shortfalls in times of economic turmoil and falling revenues is, in my opinion, not the way to govern our City.

For me the bottom line remains the same – ballot box budgeting is not good public policy.

(11/6/2020)  Sacramento voters have once again decisively rejected changing the governance of the city to the strong mayor model! I personally hope it will be a long time before the question is put to the voters again.

Comments welcome, but please be advised that uncivil comments will not be published.