You are here: Home / Outdoors and Sports / CSUS Arboretum

Members of the Sacramento Renaissance Society recently had the opportunity to attend a class/tour of the CSUS Arboretum.  The Arboretum is located west of the J Street entrance to the Sac State campus.

I signed up immediately to take the tour as I had never set foot in the Arboretum.  It was only after I started taking Renaissance Society classes at Sac State that I became aware of its existence!

A small group of us met up with Dr. Mike Baad, our tour guide, on a Friday morning.  Dr. Baad is the Director of the Arboretum.  As such, he is responsible for the maintenance of the site.

The Arboretum, founded in 1959, is a three acre botanic garden with approximately 1,300 different species of tree, shrubs and herbaceous perennials.  The site was originally planted with about 50 trees largely donated by the U.S. National Arboretum.

The land it occupies had previously been home to a pear orchard and hop farm.  I had actually learned about the Sac State campus-hop farm connection at a recent (Renaissance Society) A Cook’s Tour of Sacramento class on Sacramento’s Gold Rush Saloons!

All the varied species that make up the CSUS Arboretum collection are from temperate regions of the world – similar to California’s Mediterranean climate.  As a result, the Arboretum is a showcase for the diverse species of plants that can grow and bloom in our region.

Geographic regions of origin of the Arboretum collection (according to a handout provided by Dr. Baad):

Dr. Baad has been involved with the Arboretum for decades.  As we walked along the paths he shared interesting facts about the various species, including their origins and characteristics.  He also pointed out a number of trees, some quite large, that he himself had planted some years ago.

The Arboretum is a living laboratory.  Dr. Badd showed us several examples where large trees had been toppled by the wind, resulting in damage to neighboring trees and plantings. While it was a shame to lose them, he explained that the opening up of the tree canopy also led to opportunities for other plants to thrive.

We were each provided with a tree identification field guide, and we stopped several times on our walk to observe the leaves of a particular tree in order to determine the species.

During our walk I noted varied seating scattered about – perfect for resting and/or enjoying the moment.  I was impressed by the number of hummingbirds hovering around – they obviously love the Arboretum!

Several CSUS departments utilize the Arboretum for classes, and while we were there we observed a class taking place.  The Arboretum is open to the public, and free guided field trips are offered to Sacramento’s public schools.

Consequently, an effort to raise public awareness of the Arboretum to help facilitate the formation of a community driven “Friends of the CSUS Arboretum” is underway.  A “Friends of” organization could help support a variety of needed and desired projects – both large and small.  Additionally, “Friends” so inclined could volunteer their time to help maintain the Arboretum.

In short, I decided then and there on the tour to write a blog post about the Arboretum to help spread the word!

A project that is currently underway is the renovation of what once had been a student project – a solar-powered home that competed in the 2015 U.S. Department of Energy’s Solar Decathlon.  The structure was moved from a CSUS parking lot to the Arboretum with the thought that once it was renovated it could be utilized for, among other things, a meeting place for educational and service organizations.

As we walked past the small structure, a College of Engineering (Construction Management) teacher was preparing to start work on the building.  Our group stopped to chat, and he mentioned that he was expecting several students to join him later that afternoon.  The goal of the volunteers is to get the outside of building finished and painted before winter sets in.

To sum up, at the conclusion of our tour we all expressed our thanks for what had been a most interesting morning.   I look forward to visiting the Arboretum again to see how it changes with the seasons. 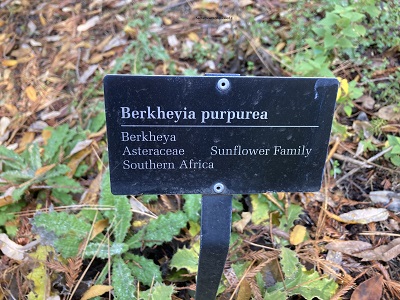 It had rained a bit the day before, but it was a beautiful day and the ground was not muddy as I had feared.  As one might expect, there had been a number of changes since my last visit.

For example, Dr. Baad, who was unable to join us that day, had been busy.  Numerous new markers identifying the various trees and plants have been placed throughout the Arboretum.  A very helpful addition for all of us who would otherwise not have a clue absent a knowledgeable guide! 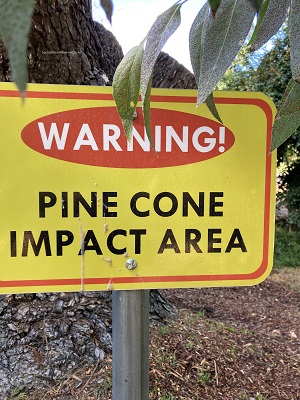 Midway through our walk I was surprised to see that an imposing tree I had admired on my first visit had suffered some type of mishap.  While the sign warning visitors to beware of falling pinecones remains in place, all that remains of the tree is part of the massive trunk. 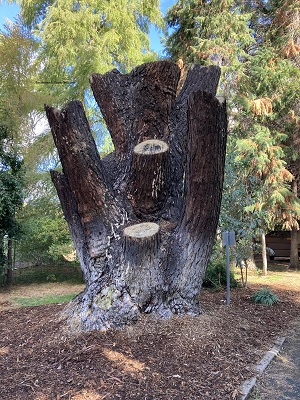 As we walked passed the Solar Nest it appeared to me that, other than the decking, not a lot of progress had been made on renovations to the building.  However, I have no way of knowing the extent of what has/has not been accomplished inside and out.

Donna mentioned that no one has, to date, stepped up to lead the effort to organize a “Friends of” the Arboretum.

To sum up, do you know someone with great organizational and fundraising skills who might be interested in volunteering to head up such an effort?  If so, please make them aware of this opportunity to really make a difference and have them contact Dr. Baad.

Comments on the CSUS Arboretum?

Have you visited the Arboretum?  What would you add?