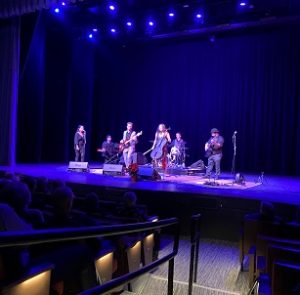 (UPDATED 10/18/12/2022) Description and review of a virtual plus an in-person Dirty Cello concert at B Street Theatre at The Sofia.  NEW: Dirty Cello returning to The Sofia! See UPDATE below.

Rebecca Roudman (cello, fiddle and lead singer) and husband Jason Eckl (guitar) shared excerpts of the band performing a variety of songs in an unedited video they had taped in front of a small audience of friends and family.

During the one-hour event the two shared stories about themselves and the band.  The two are both classically trained musicians, as are most of their band mates.  They met in college where Rebecca’s instrument was the cello and Jason’s the flute.  He later took up guitar.

The couple has been married for five years.

One of the stories they shared was the genesis of the band.  It was formed after Rebecca entered and won a local talent contest – Vallejo’s Got Talent.

The band has played throughout the U.S. and internationally, including Europe and China. The two shared several stories about their experiences on tour.

In the beginning the band hired vocalists, but Rebecca started filling that role as at times the vocalists simply did not show up for a gig.  She now feels confident enough to belt it out – and she does. 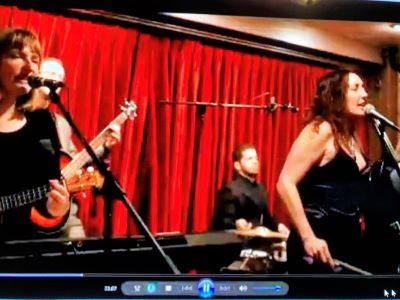 The band performed their renditions of:

Midway through the evening Dirty Cello performed Don’t Call Me Honey, a song written by Rebecca.

Rebecca wrote Don’t Call Me Honey after her experience dealing with a multitude of paperwork when buying a house.  Among other things, the older man with whom she had to deal repeatedly addressed her as “sweetie”.  She said she did not call him out on it – but instead wrote the song.

The performance of each song was high energy with the cello taking on the role of lead guitar.

As mentioned earlier, the video screened was unedited.  At one point a band member on guitar successfully grabbed a mic and stand in the process of crashing to the stage.  Later in the performance, a drum stick went flying off camera.

The concert was awesome and I can’t wait to see them in person! The band was also clearly a big hit with their virtual audience who expressed their appreciation via the Zoom “chat” function.  Dirty Cello has played at the B Street Theatre at The Sofia twice previously, and it was evident that a number of attendees has attended their live performances.

As is standard during the Six Feet Apart series of musical performances, attendees had the opportunity to also express their appreciation by making a donation to the band and many did so.

The COVID-19 pandemic has hit the performing arts hard, and this is a band that loves to perform live.

While the band has been performing virtually, they have also started performing at outdoor venues with a limited number of attendees and where there is room to spread out.

The band has a mobile stage and Eckl mentioned they are willing to go anywhere.  An upcoming concert will involve the band setting up the mobile stage and the audience pulling up in their boats to watch and listen to the band perform.  How clever is that?

(12/12/2021) A friend and I attended the Dirty Cello Concert this weekend at the B Street Theatre – and it was awesome.  Talk about high energy!

Dirty Cello played for nearly two hours without taking a formal break, and the very appreciative audience loved every minute of it.

Rebecca’s husband Jason both introduced the band members and sprinkled a few entertaining stories about the band’s adventures while touring during the performance.  Among the songs played was an original song by Rebecca and Jason titled “I May Not Be Perfect – But I Am Pretty Damm Good”.   The two were in the car going back and forth during a conversation when Rebecca made that statement – and Jason immediately replied that he thought it would make a great title for a song.

After the performance the band members met concert attendees in the lobby to chat and to sell copies of their various CDs.  Business was brisk.

My friend was really glad she had attended the concert with me.  You can be sure we will both be keeping an eye out for Dirty Cello’s return to Sacramento.

Have you attended a live Dirty Cello concert?  What was your experience?